Boy, did we get lucky.  We turned up for our Adventure Kayak Tour, with low expectations with respect to how much kayaking we’d actually be able to do.  As I kept reminding Peter, you’ve got to follow the leader, and pace yourself with the weakest person on the team.

But we turned up at 8:30 and found that we were the only two people booked on that tour! And that our young guide, Josh, was only too happy to take us out into the open water.

So we actually got in some real sea kayaking – working with the tides and the winds, and a few times doing a really hard paddle against both the tides and the winds at the same time!  It was SO fun. But the crazy and inconsistent tide patterns and winds and especially the different combinations make it pretty clear why you can’t go anywhere by yourself in a kayak here.

We stopped partway at a little island (uninhabited like all of them except Hamilton) with a beach the locals call “Beautiful Beach.”  It was completely isolated except that at one end we noticed this nice beach umbrella along with two full-length padded cushions, each with a pair of neatly rolled, matching towels on them.  Very strange – all it needed was a bottle of champagne in an ice bucket to be a Bachelor/Bachelorette final date location!

Turns out Hamilton Island has a very ritzy resort on it called Qualia – the kind of place famous people go and, in fact, Oprah rented the whole resort a few years ago – and Qualia cleans up the cushions and puts fresh towels there every morning, just in case some guest suddenly decides he/she wants some private time somewhere! So they send out a motor boat twice a day just to keep it all ready!  Talk about lifestyles of the rich and famous.  (And I was bummed cause Josh wouldn’t let me lie on the cushions or use the towels…)

Anyway, famous people aside, it was an awesome outing with some hard kayaking and some nice waves to play with.  An absolute gift, and one of my favourite moments on the whole trip so far!

We then spent the afternoon relaxing at the apartment and before dinner, we hiked up to Passage Peak which is the highest point on the island.  It was a lovely hike, the sun was low so it was mostly shaded and the views at the top were worth the hike up.

We rushed back to the apartment, trying to get here before the sun set but opened the door on our amazing view just as the sun dropped below the horizon.  It was actually very colourful for a while which went very nicely with my glass of wine!

It was definitely a more active day than we’ve had for a while and we should both sleep well tonight!  (Btw, I enjoyed Messenger-ing with Rog while we were having dinner – crazy guy was up at 4:30am TO time to go out for some fresh air!) 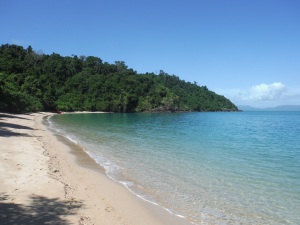 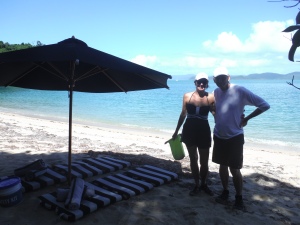 Wondering if I’m going to get a proposal…

With our crazy guide Josh.  You can see how Silverback Peter is resisting the moment (which tells you all you need to know about the relationship between Josh and Peter!). 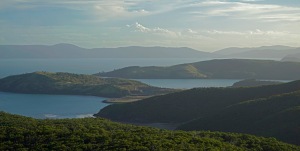 View from Passage Peak (Peter thinks this is a terrible shot, but I insisted on using it because it really shows how long the view was – plus I actually just really like the shot!)

One thought on “Sun April 19 – An Awesome Kayaking Day”