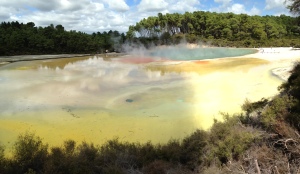 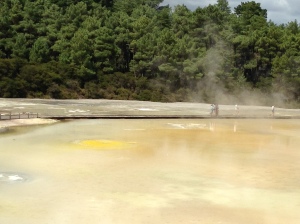 Today we visited the Wai-O-Tapu Thermal Wonderland, yes another tourist trap, but a sight worth spending some time on,  and full of Peter’s favourite photography subjects – weird colours and patterns.

The whole North Island sits atop ongoing tectonic activity and it was so interesting to see the impact of some of that activity on the surface.  The 18 sq km of this Reserve are covered with collapsed craters and boiling pools of mud, some reaching 100 degrees centigrade!  The colours and formations are visually unusual, and there’s a strong smell of sulphur everywhere.  When you see some of the little depressions in the mud where the water/mud mixture is bubbling as hard as a pot of boiling water, you get a pretty good sense of where the concept of a “witch’s cauldron” came from! It is quite unnerving to think of what is happening right under your feet to cause such a thing.

In the afternoon we drove right across the island to the Mt Taranaki area, a long drive but with some of the most spectacular scenery I’ve ever “scene.”  I have always thought Hawaii had the most beautiful natural landscapes but I’ve got to say that New Zealand is more stunning.  All the tectonic activity here has left the most interesting variations in the landscape – rounded hillsides as well as very hard-edged dramatic formations a bit like the Napali cliffs in Hawaii, all lushly covered with huge bushy trees and rain forest ferns and rolling on as far as the eye can see. Closer to the road, there are also huge green fields where cows and sheep are grazing as well as a number which are stark and dry.  It is all very reminiscent of the “Lord of the Rings.”

And then we hit the west coast, and suddenly there was an active seascape with lots of cliffs and surfing waves (but no surfers!) on the right, with forested cliffs continuing on the left (dotted with many little newly- shorn sheep!)

Through the whole drive, even along the ocean coastline, we saw only a handful of villages and no people outside of cars at all. It became very clear how low the overall population is outside of one or two urban centres.

5 thoughts on “Sun Mar 8, Wai-O-Tapu Thermal Wonderland plus a Spectacular Drive across the island”