Today we did an organized tour of Doubtful Sound – there is no public access so the Real Adventures Tour Company is the only way to see it.

The name Doubtful Sound came from Captain James Cook who was the first European to see the area in the mid-1700s.  He sailed his ship into the Sound and all his sailors wanted to keep going farther in to spend some time on land.  Capt Cook was concerned (quite correctly) that the prevailing winds would prevent them from sailing back out so he refused to land and turned the ship back into the Tasman Sea.  On the maps he was compiling at the time, he made a note “doubtful harbour” reflecting his feelings about landing there, and somehow that was interpreted as the name of the place, not his comment on landability!  The name has stuck ever since.

We decided on Doubtful Sound over Milford Sound, which is the more famous and more trafficked, because Milford is a 2-hour drive one-way from here, plus we were worried there would be tour boats all over the place while we were on the water.  Tomorrow we will drive there to do some hiking and hope that our decision was a wise one.

Doubtful is the largest of the two Sounds but attracts less traffic.  Probably because it is a complicated exercise getting there – we drove 20 km, then boated across Lake Manapouri for 45 minutes, then had to take a bus for another hour to the beginning of the Sound.  Then we finally boarded the Tour Boat which took us out into the Sound for 3 hours.

It was definitely worth the effort.  The scenery is magnificent and the tour guide spoke calmly and clearly at appropriate times.  We learned some interesting facts and, best of all, once it got windy up on the front deck, everyone disappeared inside and we had the view to ourselves. We saw a group of bottlenose dolphins playing in the water near the boat, and we saw a herd of the local seals lying around on a rocky outcrop.

The Sound is about 30 km long with steep cliffs up each side, all covered with dense vegetation which is literally hanging on by its roots, since there is no topsoil.  Every once in a while the weight of all the vegetation gets too heavy and huge pieces of the cliff break away and avalanche down, leaving bare slopes until the next generation of vegetation sets in.  It is completely uninhabited and we saw only one sailboat while we were out.

The views are typically very long through the Sound so you have this wonderful open tunnel feeling – steep cliffs on each side, but of course no ceiling!

Peter took over 300 pictures which he hasn’t finished sorting so I’m attaching a couple of mine…I also took over 200 but I was able to easily weed out many of them!  Peter should have some gorgeous shot when he’s done. 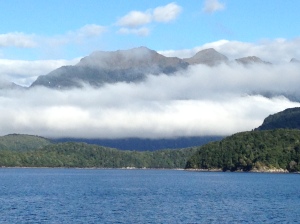 Starting out when the sky was still quite blue, looking back into land.

Some of the bare areas caused by “vegetation avalanche.” 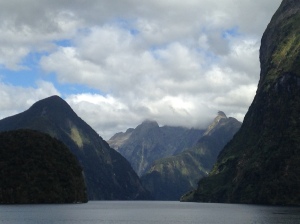 And a final foggy view, as the clouds moved in to stay. 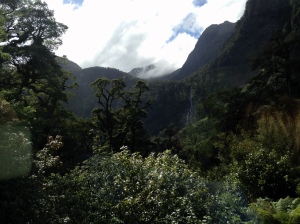 These are silver beech trees in the middle of the shot.  As they age, they lose all their leaves but the trunks and broken branches continue to point out in all weird directions. These are the trees that inspired Peter Jackson’s creation of the “Ents” in Lord of the Rings – basically trees with arms and legs.  We saw numerous better examples on the bus ride but I couldn’t snap them quickly enough.