Kind of like from nowheresville to nowheresville!  With a lot of sameness in between.  Endless fields of savannah grass, small trees, very red soil and huge termite mounds.  And the occasional stray cow or kangaroo near the highway.

But there is something very hypnotic and peaceful about it, and neither Peter nor I minded the long drive.

It is interesting along the way to think about 150 years ago or so when the first white settlers were here, I think mostly establishing large cattle operations.  I suspect the highway we’re driving on is the same route followed by the “cowboys” or cattle herders and I wonder what kind of people they would have been, likely on horseback, to ride for days and weeks on end without seeing anyone or anything.  And what kind of people would actually have been attracted to settling vast unchanging lands like these in the first place!  Clearly people with a hankering for wide-open spaces and solitude.

In Halls Creek which is apparently even smaller than Fitzroy Crossing (as if that were possible,) we are staying at the Kimberley Hotel/Resort which is surprisingly hopping with lots of what appear to be local business travelers.  The parking lots are filled with white 4WD vehicles, mostly covered with lots of thick red dust so not sure exactly where all these people are going to or coming from but it looks pretty off-road – would love to know what they all do for a living!

Before dinner, we went for a quick drive to see the China Wall nearby, which is a white quartz outcropping shaped much like its famous namesake, and really appears quite odd in the middle of the red soil and rocks which dominate the landscape.

Tomorrow we head off on an off-road adventure as we travel into Purnululu National Park to visit the Bungle Bungles – something I’ve wanted to do for a long time.  I can’t even remember how I first heard about them but they seem almost mystical to me –  huge red beehive-shaped rock formations, which I believe were of great significance to the Aborigine population.  I’m sure there is much written about them, so I should probably do some more research before getting into any further detail!

To note – we will be offline while we’re off-road so no blog updates for a couple of days.  The next one will be long!

The most common form of termite mound we’ve seen – this one was 5 ft in diameter and about 5 ft high!

A less common construction which we termed “gothic” in style.

Peter’s shot of the China Wall, near Halls Crossing. 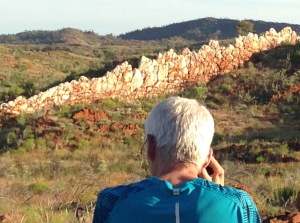 Peter getting his shot of the China Wall.