We head off on our drive to the Bungles, all psyched for two nights of camping.  We even packed away our computers and chargers which was about the hardest part!

The Bungle Bungle Range is in the middle of Purnululu National Park, about 175 km from Halls Creek.

The Range consists of thousands of sandstone towers that have been eroded into beehive-shaped mounds over time.  Most interesting visually is the fact they are horizontally striped grey and orange, due to the presence of cyano-bacteria which develop to different strengths depending on how porous the rock is. The most porous areas produce the heavier grey bands and the less porous allow the natural sandstone to show, which is then coloured by the same iron oxide that creates the red soil and rocks that dominate the landscape generally in the Kimberley.  (One upside of our timing which is so close to the end of the rainy season is that the vegetation is still lush and green throughout the Kimberley and makes for a very nice visual when combined with the red.)

I don’t remember how I first heard of the Bungles but they were only discovered by “tourism” in the mid-1980s so I suspect it was around then.  They were so visually striking and I liked the idea they were pretty much inaccessible!  At the time I said to myself if I ever got to Australia, they would be top of the list!

To get to the Park entrance, you have to drive 53 km on a pretty basic dirt road.  You must have a 4WD to get in there – the reason we rented our little 4WD campervan to begin with.  The road has actually been graded recently so it’s not as bad as it gets later in the season, but it’s still a slow and very dusty drive.

It took 2 hours to get to the entrance and then another 30 minutes to get to the campground which, very fortunately, is open but not busy at all.  In fact, the park generally is incredibly quiet  – the regular tourist season starts May 1st and I gather it gets a lot more crowded then.

The actual view of the Bungles is another 45 minute drive past the campground.  They really remain quite hidden by the other small ranges and ridges in the area, until you get very close and suddenly they are all around you.  I hadn’t realized there were so many!

They glow amazingly at sunrise and sunset so that set the timeframes for our drives and hikes into the Range.  Most of our viewing was done from the Piccaninney Creek area since unfortunately we didn’t have the time to drive to the other end of the park for that perspective.

We visited them for the first time at sunset (5:00pm) and then got up at 4:30am the next day to see them at sunrise and hike into Cathedral Gorge.  We went back again that day at sunset and then took a helicopter ride at 6:30am on the final day to see them from above.

The only minor hitch was that the park rangers set some forest fires in the distance to create firebreaks to protect against future lightning strikes.  All very noble but I wish they’d waited one more day since they created a somewhat hazy horizon.  We were worried it might impact our helicopter tour but, apart from the distance views being a little hazy, the helicopter was close enough that it didn’t affect our viewing or Peter’s shoot.

Camping in the Britz was a bit of a challenge – mostly due to assembly and disassembly several times each day.  If we’d had a tent, it would have been a lot easier!  But knowing it was only for two nights helped significantly.  We had a lovely isolated campsite with incredible stargazing opportunities and overall, we both think it was actually a very special framework for our Bungle visit.

I’m very happy that I finally got to see my Bungles and Peter is pleased with the photographic results so it’s been a great addition to our Australia itinerary.

Now we’re back in civilization in Kununnura for a few days. First step was to hose off the heavy layer of red dust that coated the truck and was our most physical souvenir of the roads into and around the Bungles! 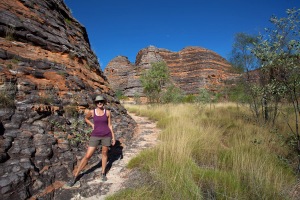 I finally meet my Bungles! 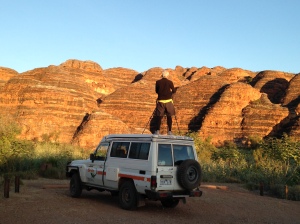 And Peter meets his Bungles! 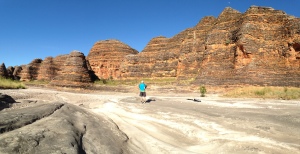 Shooting in the morning. 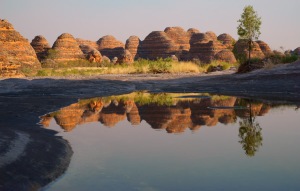 Peter’s Bungles again – I love this shot, which has some of the smoke haze in it.

Bungles from the helicopter. 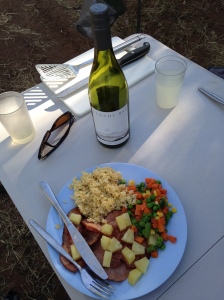 And what a dinner it was!

One thought on “Apr 9-11 Two Days with the Bungles”