Headed out early this morning from Batchelor into Litchfield National Park, where we hiked from Buley Rockhole to Florence Falls. The trail follows Florence Creek for a couple of kilometres until you reach the Falls.  There were lovely sets of rapids along the way, and a terrific swimming pool at the bottom of the Falls.  Had a nice swim there before heading back to the Buley carpark.  On our way out of the park, we stopped in to see the Termite Mound Exhibit which was pretty disappointing.  I was really hoping to see some actual termite activity but instead it was more of an information exhibit.  Did get a shot of one of the largest mounds we’ve seen though!

We then headed off to Darwin which was about 125 km drive – a piece of cake considering some of the drives we’ve done recently!

One of the very interesting things about Darwin and the area south for 100km or so, is the preservation of all the historic sites related to the air force activity during WWII.  This is where the air support for General MacArthur’s actions was based and where the planes landed and took off.  Many of the old airstrips – each with a name – are still lying there right beside the highway.  And there are signs indicating where the various barracks were located, quite well-spaced apart which I imagine was intentional.  There is an amazing amount of historic preservation of all these details. I think the Aussies are very proud of their contributions to the war effort.

When we arrived in Darwin, we checked into our hotel down by the ocean, and then immediately took the Britz back to Aussie Campervans.  We returned it a day early with no refund, but we both felt surprisingly unencumbered to be rid of it.  It really was a load around our necks for the last little while!  When the taxi picked us up to take us back to the hotel, we got into a Prius and it felt like the height of luxury – actually had some acceleration, no squeaks or creaks at all, and it was SO quiet!

The Britz was a tiring undertaking for both of us, even staying at motels every night.   It was an experience for sure, and we both learned a lot about how we would travel in the future, but I don’t think I would do it again.  I feel a bit sad about that, feels like I’ve lost some of the taste for adventure that I’ve always had. I suppose it’s inevitable that age takes its toll – silly things like having to get up to pee three-four times a night (no fun in a small campervan,) an aching back and dust everywhere (and I mean everywhere.)

Peter insists that I add here that HE would do it again in a flash, but with a tent.  (Guess he will only need a one-man tent when he does!)

Not to underline my declining taste for adventure but I am quite excited about tomorrow’s activities which include appointments for a pedicure and at the hair salon!  (Peter sighs loudly in the background.) 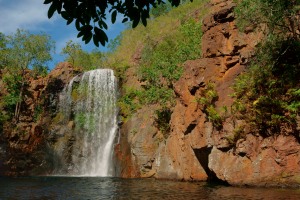 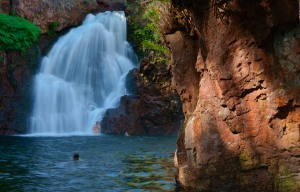 The other half of Florence Falls, with swimmers! 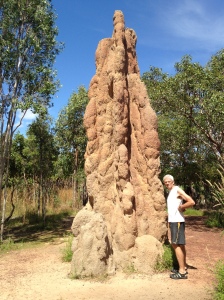 Biggest termite mound!  This one is over 50 years old and is still a functioning residence.  We had hoped to see some of the termites actually working on it but perhaps this one is now a retirement home and they’re all reclining inside with TVs and crossword puzzles.

One thought on “Thurs April 16 – To Darwin, And Back to Civilization”